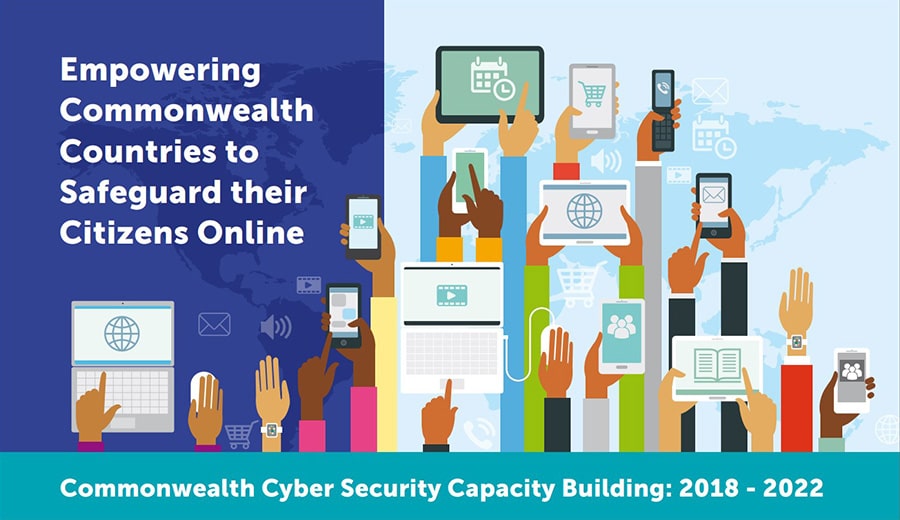 The UK’s leading role in tackling cybercrime is delivering benefits to tens of millions of Commonwealth citizens, as well as increasing protection online for British citizens and businesses, according to a new report released today by Get Safe Online supported by the Foreign, Commonwealth & Development Office, ‘Empowering Commonwealth Countries to Safeguard their Citizens Online’ .

With the internet and the activity of cybercriminals transcending national borders, and online harms rising significantly during the pandemic, protecting UK citizens has meant strengthening our defences both at home and abroad. At the Commonwealth Heads of Government Meeting (CHOGM) 2018, a landmark Cyber Declaration was agreed, supported by the UK’s Commonwealth Cyber and Tech Programme – formerly the Commonwealth Cyber Security Programme.

As the UK prepares to hand over the Commonwealth Chair in Office to Rwanda at this year’s CHOGM – which commences in Kigali today – the scale of the benefits delivered to citizens over the past four years has been revealed.

Over the last four years, the UK has invested over £15 million in enhancing cybersecurity across the Commonwealth. Key elements and outcomes, which are summarised in a report released today, include:

As well as helping citizens across the Commonwealth become more cyber secure, the UK’s leadership in this area has led to real benefits for people in the UK, including:

Lord (Tariq) Ahmad of Wimbledon, Minister of State for South Asia and the Commonwealth, comments: “Those countries that have the capacity and expertise, should be lending and sharing that expertise with others across the Commonwealth.”

” ‘No-one should be left behind’ is a phase we use often for different aspects, but when it comes to cyber I think it’s extremely important, not just in terms of the opportunities but also the challenges and threats that we face on a daily basis.”

Tony Neate, CEO at Get Safe Online, said: “We’ve seen a huge acceleration in the use of digital technology following the pandemic, with more people working from home and attending school online or using the internet to shop.

“Get Safe Online is therefore proud to be one of the partners supporting improved cybersecurity and resilience across the Commonwealth over the last four years, with almost nine in ten of those who visited a Get Safe Online website reporting that they were more able to manage online risks.

“From helping different countries to understand their vulnerabilities, to training hundreds of ‘cyber champions’ in 21 countries and helping a third of participating internet users learn better digital habits, this vital work continues to make a real difference in reducing the devastating personal and economic costs of cybercrime.”

Peter Smith, International Development Manager at Torchlight, said: “Torchlight delivered the Commonwealth Cyber Incident Response network as part of the FCDO’s Commonwealth cyber capacity-building. With this community implementing and evolving national computer security incident response and sharing best practice, we have been at the forefront of building a safer internet in the Commonwealth over recent years. This has brought real benefit both to the citizens of Commonwealth nations, as well as to the many UK and international businesses who want to continue investing in these countries.

“Building on the community’s success to date, our next priority is enhancing regional and international co-ordination on incident response, helping to move this issue up the agenda, and evolving our mentoring process so more of the early adopters can share their experiences with the countries who are just starting out on this journey.”

Dr. Tawanda Hondora, Head of Rule of Law at the Commonwealth Secretariat, said: “For too long, the fight against cybercrime has been hindered by outdated legal and policy frameworks in some countries – making it more difficult to bring cybercriminals to justice.

“As a result, 90% of Commonwealth countries now have the capacity to investigate and prosecute cybercriminals and have dedicated units in many police forces, trained judges and magistrates, and greater capability to collect, process and use electronic evidence in criminal enquiries and trials. We’re now working to ensure that smaller Commonwealth countries also share in these benefits.”