DBS is working with JobsAware to raise awareness of job scams 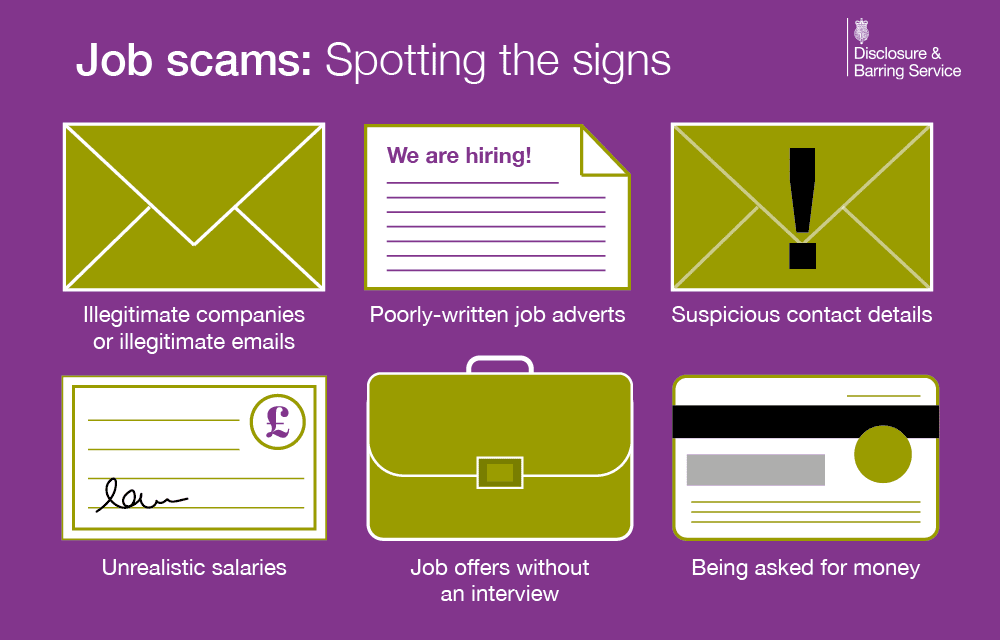 The Disclosure and Barring Service (DBS) is running a campaign to raise awareness of job scams and employment fraud among job seekers. DBS is working alongside JobsAware, Disclosure Scotland and AccessNI.

JobsAware is a non-profit organisation, with cross-government support, that informs people of how to avoid job scams and unfair working practices, and supports job seekers with suspected fraud, malpractice and other poor experiences.

Job scams are extremely prevalent in the current job market. During the pandemic, almost three in four job seekers (74%) applied for jobs that were not genuine.

Lack of awareness and education surrounding employment fraud is one of the reasons that job seekers fall victim to these scams – it’s important that job seekers are equipped with the relevant knowledge, enabling them to identify potentially fraudulent job adverts.

Information provided through fraudulent job adverts can be used in a number of ways by criminals, including identity theft.

Chair of JobsAware – previously known as SAFERjobs – Keith Rosser, says: “With the way we work and look for work continuing to evolve, job scams are becoming increasingly common and sophisticated. We know how damaging it can be to fall victim to such scams now more than ever. That is why it’s important to educate and arm job seekers with the understanding and support they need to recognise and report suspected fraud.”

The below infographic shows the common signs to look out for, when applying for a job. 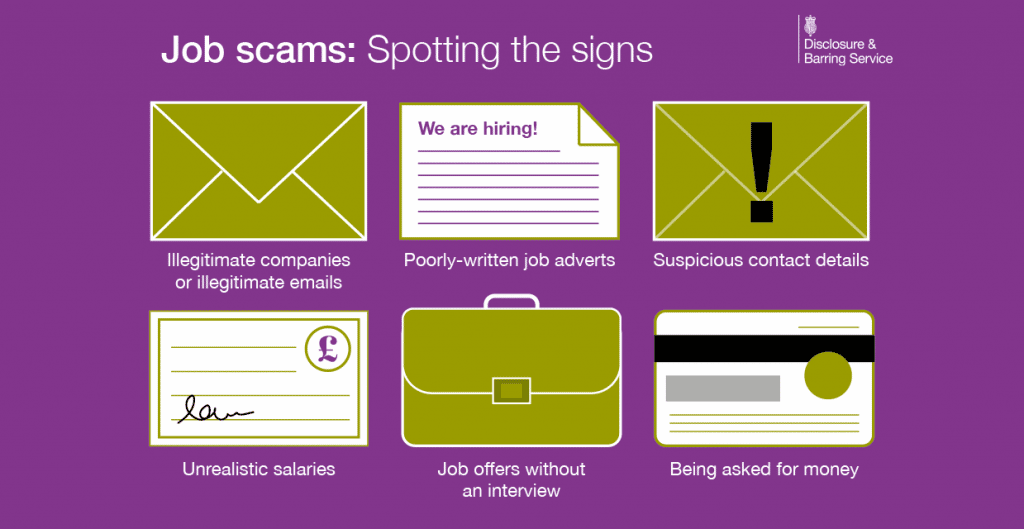 Executive Director of Barring and Safeguarding at DBS, Dr Suzanne Smith, says: “The exploitation of job seekers has risen during the pandemic and the methods being used are more and more sophisticated. We know that some companies have taken money for DBS checks from unsuspecting job seekers, relieved that they have been promised a job but the DBS check never arrives and the job was never real. The negative impact on the person on the other end of these scams is significant – we are working alongside JobsAware to help prevent this from happening by raising awareness and signposting those affected to where they can get help.”

Amanda Paremain, 55, a job seeker from Birmingham, applied to a fake job advert on a popular jobs board website claiming to be from a holiday company. Despite not being asked to undertake an interview, she was offered the role, and then directed to a fake website to make a payment for a supposed DBS check. Before making the payment, Amanda made online checks, and found that others had been scammed by the same outfit.

Sami Ayubi, a 44-year old carer from Exeter, was offered a customer service role with a business that claimed to be a social network for footballers. After accepting the position, he was pressured to carry out an “expedited DBS check”. He was directed to a fake website for to make a “specially reduced” £15.99 payment and realised it was fraudulent. Sami has since discovered that many others have unfortunately fallen for the same scam.

If you suspect you have been targeted, been the victim of a job scam, or have been treated unfairly, please report the company and website to JobsAware via their portal and they will investigate and take further action if necessary.

If you have parted with money as part of a suspected job scam, please contact the police and they will take the matter further.

For more details on the campaign, or to speak to Dr Suzanne Smith of DBS, or Keith Rosser of JobsAware, please use the details below.